Future-Proof Your Career As A Data Scientist

Ok, we know we’re stating the obvious when we say that the world of work has changed rapidly in the last two decades. The global marketplace and the pace of technological progression is transforming work in front of our eyes.

This change is neither inherently positive or negative. But it does mean that candidates who want the pick of the best roles need to think about future-proofing their career.

To infinity... and beyond!

Buzz Lightyear unknowingly summed up the approach all of us in the job market need to take when planning our careers.

It’s no longer an effective strategy to think that your career will be the same year in/year out. Possibly with a bit more responsibility thrown in for good measure as the years pass.

Mainstream headlines that scream of robots taking our jobs are wildly exaggerated (and wholly incorrect). However, there’s no doubt that the smart career-seeker will take into account the effect Artificial Intelligence (AI) will have on the global jobs market.

One of the strongest ways to build a career that remains relevant both now and in the future is to become a data scientist.

Data scientists are in demand now and in the future

The jury if out on whether Abraham Lincoln or Peter Drcuker said, “the best way to predict the future is to create it.”

No matter who uttered these meaningful words, the sentiment is true for the future of work as much as much as it is for any other area of human endeavour.

There’s a lot of discussion, and disagreement, on what the future of AI holds. While there’s no doubt the data economy is here to stay, how it looks in years to come is anyone’s guess.

Surprisingly, there’s an argument that the future of AI is less data, rather than more. However, data scientists will still be much in demand as a “top down” reasoning approach is applied to data, rather than the current “bottom up” data mining way of doing things.

LinkedIn publishes a list of the most in demand skills every year. Data science has made that list every year since 2012. The professional networking site also measured a 650% increase in demand for data scientists from 2012 to 2017.

Data scientists are in demand due to the skill-set overlapping mathematics and business.

The mathematical element of data science stems from statistics, and statistics date back to antiquity. The first writings we have on the subject date from the 9th century and were written by Arab scholar, Al-Kindi.

Since a large part of statistics relates to data collection and analysis, it’s easy to see how statistics forms part of the foundation of data science. However, data scientists are also skilled in working with datasets that arise from images, texts, social networks, actions on websites, audio and video files etc. and extracting valuable information from them.

In general, a data scientist has a skill-set made up of these four areas:

Since data, AI and machine learning are broadly combined, it’s impossible to predict what responsibilities a data scientist will have in the future.

The role of a data scientist will also differ depending on whether you are employed by a public body (government has a lot of need for data scientists too) or a private company.

It is possible, however, to broadly outline the relevant key tasks that would make up your day.

As digital transformation becomes an ever increasing priority for businesses and organisations across Europe, the demand for data workers will only increase.

A report by the European Commission, released in 2017, stated that the number of data workers working in Europe by 2020 will increase by 14.1%. Alongside this growth, the report claims that there will be up to 769,000 unfilled data jobs by 2020 due to a skills shortage. The European Commission also states in its report that a further 100,000 new data jobs could be created by 2020 due to the rapid digitisation of Europe’s industries. 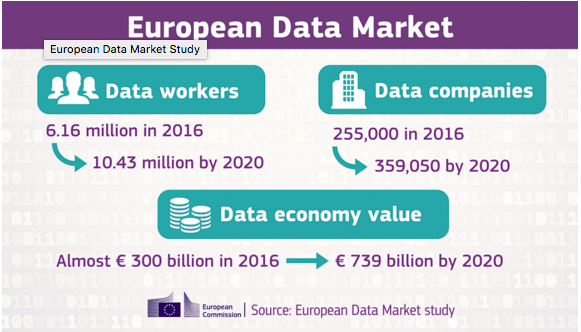 Hard and soft skills of a data scientist

Securing a role as a data scientist requires a combination of soft and hard skills.

It goes without saying that you need a high degree of technical ability.

While it is possible to enter the workplace as a data worker with a Bachelor degree in statistics, computer science or engineering, data scientists vying for the best roles often have Masters of PhD degrees in these subjects.

Strictly speaking, a degree in Mathematics is not a requirement for a data science career. However, a strong grasp on mathematical fundamentals is, e.g. understanding probability theory.

Developing a knowledge of certain programming languages is essential to building your career as a data scientist. Presently, the languages most in demand are Ruby, Python and JavaScript. It’s also critical to be fully proficient in SQL as a database querying language.

As a data scientist, you’ll be the one sifting through mountains of data and finding all the business insights that could transform your organisation. But you’ll need to be able to illustrate and explain these to people who don’t have your skillset.

As far as soft skills go, you’ll need to focus on developing your communication skills. Being able to explain your processes and findings to various stakeholders within your organisation will be a significant part of your role.

While we’re not in agreement that the race between robots and machines is as one dimensional as the media claims, it’s heartening to realise that our human characteristic of empathy is highly valued in the workplace of the future. Data scientists who can look at an issue beyond a data set, and factor in unpredictable elements, will go far.

Cultivating an analytical mindset is a valuable skill for a data scientist. Be curious and question the data you’re working with to gain the insights you need.

The rate at which emerging technologies move is already fast, and the pace is only set to quicken. Existing technologies may become obsolete faster and new technologies replace them. Data scientists who want to future-proof their career need to develop a high level of adaptability to maintain a cutting edge in a data role.

Master the art of self-education

Constantly investing in your own self-development is a worthwhile endeavour for any professional. As a data scientist, you’ll find great value in doing the following:

Keep doing these four actions listed above, and you’ll truly put Buzz Lightyear’s words into action. Your career as a data scientist will take you all the way to infinity... and beyond!